I have just finished reading Adam Savage’s book “Every Tool’s a Hammer” (ISBN 9781471186004). It was a thoroughly entertaining and informative read and I highly recommend it.

The section on lists particularly resonated with me. I use a similar system at work: an empty box indicates a yet to be started task, a box with a line through it a task that has been started in some form and a filled in box indicates a completed task.

However my favourite part was a new word I learned – ferroequinologist!

Despite the software indicating that the siding (between the Loco Shed and the Controller) would be possible, in practice it was too tight.  Below is what the layout will now look like.

Below is the fourth design iteration of my small N Gauge layout.  I have replaced the two Peco engine sheds with a single Graham Farish pre-built unit.  This gives me more track space at the front and rear of the shed (the MkIII version was very crowded) and allows for the addition of a storage line down the side of the shed.

I have made some modifications to my planned layout.  See the image below.  I have simplified the design and added a signal box.  Construction has commenced with Tasmanian Oak beams and plywood base.  The controller will be a Morley Controllers Vector Zero Two (rapidly becoming my favourite controller).

Edit:  See below for a slightly modified “MkIII” design.  This is the design I have commenced construction on.

So, it’s been a while since I posted a blog update.  Here goes:

Once again this event crept up on us: surely 12 months haven’t elapsed since the last exhibition?  As usual I attended twice, once with my father-in-law and children on the Saturday and once with a friend (who is also into model railways) on the Sunday.  According to the brochure this is the 35th such exhibition.

While the number of exhibitors and vendors seemed the same as previous years the floor space had increased significantly (this year both the Robinson Pavilion and the Silver Jubilee Pavilion were used).  This was great news as it made navigating the crowds with small children a little easier.  Popular exhibits with the children included anything with Thomas the Tank Engine in it….

My favourite layout by a fair margin was “Avalon”, a British N gauge layout.  We saw this layout as a “work in progress” last year and were very impressed.  Running were a variety of steam and early diesel locomotives (mostly Graham Farish as far as I could tell).

Another highlight was the “Northern Districts Model Engineering” display.  This included a ride-on train that we all enjoyed and some fairly impressive large scale locomotives.

I have just finished rearranging the study (again).  The motivation this time around was to make the model train layout more accessible to me (and the kids of course – Declan has been complaining he can’t see trains).  It now sits approximately one metre off the ground and (when I clear out some stuff) is accessible on three of the four sides (including both “long” sides).  The study is quite a high use room: anything of any value that we want to keep the kids from damaging tends to get stored here.  My laptop is in the study, as is Kylie’s G5 iMac, the printer, the ADSL modem and network switch and so on and so forth.  The study is now much easier to access and egress.
The only downside of the movements was that a track section switch on the train layout was destroyed by the door frame.  Thankfully I had a spare and was able to solder (with only minimal burning of flesh) a replacement in situ. 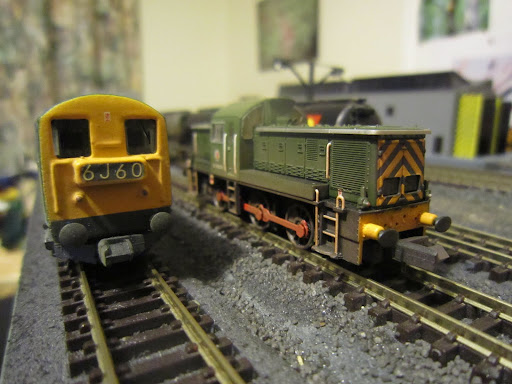